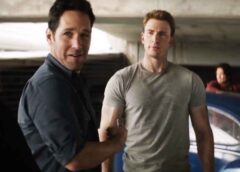 When Paul Rudd joined the cast of Captain America: Civil War, that was the first time the actor had met Chris Evans. Now we know the fun story behind it.

If something is distinguished by Marvel Cinematic Universe It is because their superheroes are played by great Hollywood actors. Chris Evans like Captain America, Samuel L. Jackson as NicK Fury, Scarlett Johansson as Black Widow, Robert Downey Jr. like Iron Man or Paul rudd like Ant-man.

Despite having starred Ant-Man in 2015, Captain America: Civil War (2016) was the first time that Paul rudd He met his fellow Avengers as well as the first time he encountered his own Steve Rogers (Chris Evans).

On the podcast Variety's "Actors on Actors"Both Chris Evans and Paul Rudd recalled this meeting. But what was going to be an exciting time, turned into something weird because Paul Rudd participated in a number of song and dance.

This was the meeting, explained by the two actors.

Paul Rudd: "When I was working with you on 'Civil War', I was nervous in that first scene we had where we were in the parking lot."

Chris Evans: "That was the first day I met you."

Paul Rudd: "Yes, and there was a real kind of nervousness about Scott Lang, and I really played with that because that was part of what I felt anyway. I looked around and thought, "Wow, there's Chris Evans and there's Sebastian Stan, and wow, and there's the suits." Remember there was a little makeshift locker room? We are all changing clothes, and I saw the suits on the shelves. It felt like being in the locker room of a Super Bowl winning football team. ”

Chris Evans: "I don't know if you remember this. That day was literally the day I met you. Anthony Mackie and Scarlett Johansson and I had in mind that we were going to film, this is very funny, a little video just for the Marvel gang. As a small culmination, like a yearbook video, with that 'Grease' song. "Let's go together, like lama branch", whatever that song is. We were going to go around, take little video clips of people dancing and put it all together. The first day I thought, 'Very well, I will begin to collect some of these images.' I have the video. "

I was like, ‘Hello, nice to meet you. You don't know me, but can I do this for me? It was you, Mackie, I think Jeremy Renner, Sebastian, and I just said, 'Look, everyone dances for 30 seconds,' and they did. You were dancing voluntarily with a little explanation from me, and then I never completed the video. I ended it abandoned But I got that video of our first day of meeting with all of you dancing.

Paul Rudd: I must have blocked it. I don't remember it at all.