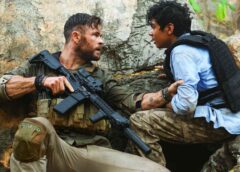 Earlier this week Netflix revealed the top 10 original streaming service movies of all time. Surprisingly, the list is made up exclusively of movies from the past two years, and the first one isn't even close to the others. With more than 99 million visits since its launch Tyler Rake (Extraction) smash all records on the platform. The actor Chris Hemsworth resorted to Instagram to react to the news and wrote: “I can't thank you all enough for the continued support of Extraction! I'm still going strong and it's the biggest # 1 movie for Netflix. You are the best".

Extraction's success became clearer after its arrival on Netflix, as they announced that it had the biggest service release of any original movie, turning the actor Chris Hemsworth in the most popular during the Coronavirus pandemic. So it didn't take long for them to announce that work had also begun for a sequel.

Joe Russo responsible for Marvel movies like Avengers: Infinity War (2018) or Avengers: Endgame (2019) has closed the deal to rewrite the script for the film and return as a producer. It's unclear what story the new installment will tell, but it could be a prequel or a sequel. So much Chris Hemsworth like the director Sam Hargrave They are not linked yet and will only start negotiations once the script is complete.

"We are not yet committed to whether that story goes back or forward in time," Joe Russo said in a previous interview. "We leave a grand finale loose that leaves question marks for the audience."

Netflix previously confirmed the official number of people that Chris Hemsworth's Tyler Rake character kills in the movie, putting the number at 183 people, making him the deadliest mercenary.