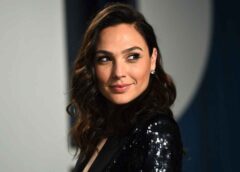 Actress Gal Gadot (Wonder Woman) has posted her coronavirus test prior to starting filming for the Netflix movie Red Notice.

The production of Red Notice of Netflix is returning to the filming set this month after being closed in March due to the Coronavirus (COVID-19) pandemic and as part of the security measures implemented to return to filming, the stars must undergo the different tests to check that they are not affected. Now, Gal gadot is sharing photos of his experience with fans on social media, noting that the preparation for filming “looks a little different now.”

On Twitter, Gal Gadot shared two photos, one of her in which she had a nasal smear test and another in which she showed her Après Corona de Sol Ángeles t-shirt. Whose proceeds are donated to the World Health Organization.

“Getting ready to return to the set of Red Notice. But the preparation looks a bit different now… #Sigueseguro ”. Gal Gadot wrote.

The actor Dwayne “The Rock” Johnson described Red Notice as Netflix's largest investment to date. He will share the limelight with Ryan reynolds (Deadpool) and Gal gadot (Wonder Woman). The title of the film refers to a notice issued by Interpol listing the people wanted for extradition. Since in the world of international crime, a red notice issued by Interpol is a global alert to hunt down and capture the world's most wanted. The world's biggest art thief. The best tracker in the world. The biggest scammer in the world ”.

While Gal gadot is revealing the process to get your COVID-19 test, the very Dwayne johnson recently posted that he and his family had actually tested positive for the disease. In an Instagram post last week, he said that while they are doing well, it was certainly one of the most challenging and difficult things that he has ever personally endured in his entire life.