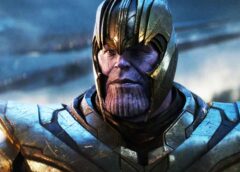 Thanos has been the great villain of the Marvel Cinematic Universe, but how old is he at the moment he is developing his plan?

The movie The Avengers (2012) introduced for the first time Thanos in his post-credits scene. This version is very different from what they have always shown in Marvel comics, as he is a member of a super powerful and immortal race called the Eternals. Born and raised on Saturn's moon Titan, Thanos eradicated most of his people, developed an obsession with death, and battled superheroes like the Avengers, Captain Mar-Vell, Silver Surfer, and Adam Warlock. Its history goes back to the pages of Iron Man # 55 in 1973. After forming a rivalry with Mar-Vell, Thanos quickly became one of the greatest villains something that was consolidated in the 1990s, when he killed half of everyone in the universe with the Infinity Stones.

Thanos made his shocking first film appearance at a time in his life when he was already searching for the Infinity Stones. At this point, he knew that the Space Gem was on Earth and was determined to get it back. Since this speechless cameo was filmed before Josh Brolin was officially chosen as the character, Thanos was played by the actor Damion Poitier, 32 years old. That is why his face changed as he appeared in more movies.

Regarding the age of Thanos, the character was already among the oldest beings in the Marvel Universe. Although it is not as old as Thor (Chris Hemsworth) u Odin (Anthony Hopkins). Joe Russo, one of the directors of Avengers: Endgame, has confirmed that Thanos is around 1,000 years old. He referred to Thanos as the "Genghis Khan of the universe" who has fought "everyone."

Will we see it in the movie The Eternal?

That Thanos is so old makes sense, especially if Marvel plans to connect him with The Eternals, who will join the Marvel Cinematic Universe in their own Phase 4 movie in 2021. If he is a member of the Eternals as in the comics, that would explain its colossal strength and impressive longevity.

This would imply that The Celestials They were experimenting a long time on Earth and they created the Eternals and then they did the same on Titan a few years later. Since probably Thena (Angelina Jolie), Ajak (Salma Hayek), Ikaris (Richard Madden) and Sersi (Gemma Chan) are much older than Thanos. Since they were influencing human civilizations more than 1000 years ago.