When Brie Larson’s Captain Marvel enters the Marvel Cinematic Universe in 2019 just two months ahead of “Avengers 4,” she’s potentially going to have a big impact on the story left hanging at the end of “Avengers: Infinity War.”

Sure, “Captain Marvel” won’t take place at the same time as “Infinity War” or any of the other current Marvel movies — instead, it’s hopping back in time by a couple of decades. But we have every reason to believe the film will serve as a direct lead-in to the battle with Thanos, thanks to the post-credits scene in “Infinity War.”

Taking place just after Thanos completes his Infinity quest and eliminates half of all life in the universe, the scene features Nick Fury (Samuel L. Jackson) and Maria Hill (Cobie Smulders) driving around a major city just as people begin to disappear. As Hill fades from existence, Fury scrambles to activate a device he’s apparently been carrying with him the whole time: a boxy, souped-up 1990s pager. Fury manages to send a signal just as he himself disappears, and as the scene ends we see a pixelated version of Captain Marvel’s star symbol flashing on the pager’s display.

So it’s very likely that the Captain Marvel’s stand-alone film will provide some major hints as to how the Avengers will be able to recover from their crushing defeat and bring back all their dead friends.

There’s a lot of info to go through here, but we’ll start with the basics of what we know about the film and the Captain Marvel character from the comics. 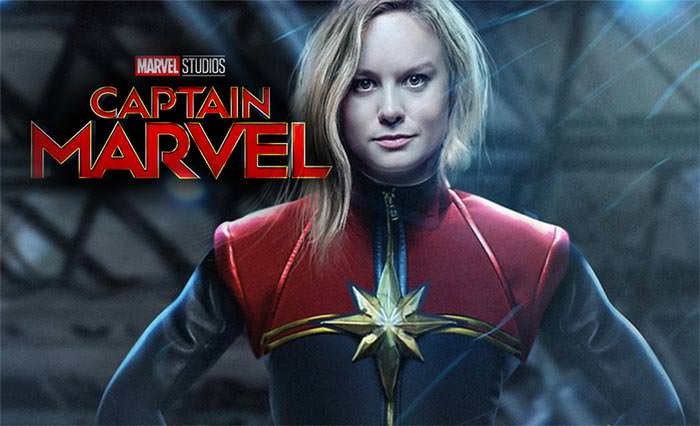 There isn’t a ton of known information about what will happen in the movie version of Captain Marvel’s story — Marvel has kept details tightly wrapped — but we do know some key items. The film is a prequel that takes place in the 1990s and will center on human Carol Danvers, who will be played by Brie Larson, as Danvers becomes Captain Marvel. Danvers will be mentored by the alien Mar-Vell (Jude Law). Nick Fury will appear. And the plot concern the Skrulls, a race of powerful, shape-shifting aliens with green skin, wrinkly chins, pointed ears, and an interstellar empire.

In the comics, Carol Danvers wasn’t the original Captain Marvel. Instead, it was Mar-Vell, a Kree warrior and hero among his people. The Kree are the blue-skinned people we saw in “Guardians of the Galaxy,” including Ronan (Lee Pace), who will also have a role to play in “Captain Marvel” since it takes place well before he died.

Mar-Vell was part of a white-skinned subspecies among the blue-skinned Kree, so he could blend in on Earth. As such, he was sent to Earth to observe humanity’s progress and assess if they are a threat to the Kree. But while he was there, Mar-Vell engaged in some super-heroics, causing humans to misinterpret his name and dub him “Captain Marvel.”

Carol was an Air Force pilot tasked with investigating Mar-Vell, but befriended and later fell in love with him. During a battle with Mar-Vell’s enemy, Yon-Rogg, Carol was caught in the explosion of a Kree device that infused her DNA with Kree DNA. That gave her a number of special powers like what Mar-Vell has, including flight, strength, durability and the ability to absorb energy.

As for the Skrulls, in the comics they’re frequently at war with the Kree, as the two alien cultures have similarly powerful, similarly expansive interstellar empires.

Notably, neither Captain Marvel nor Mar-Vell are involved in the comics story that most closely resembles the plot of “Infinity War”: A six-issue 1991 miniseries called “Infinity Gauntlet.” But looking through the comics (Thanks, Marvel Unlimited!) beyond the “Infinity Guantlet” storyline, there are several concepts that could easily connect Captain Marvel to the action.

Phil Hornshaw, Phil Owen and Ross A. Lincoln - The Wrap