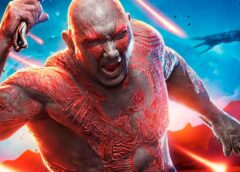 Drax's narrative arc is reflected throughout his body and recently, James Gunn explained why.

Without a doubt, one of the most beloved characters by Marvel fans is Drax. The member of the Guardians of the Galaxy Not only is he covered in tattoos etched in the flesh and possesses the ability of invisibility, but he also has his sentimental side. Proof of this are the writings on his skin. And this time, James Gunn revealed what these tattoos mean.

The character played by Dave Bautista at Marvel Cinematic Universe He has a history full of pain and revenge, caused by the loss of his family. Before meeting the Guardians and joining them, Drax the Destroyer was a solitary entity locked in a maximum security prison; a being in search of revenge for the death of his beloved wife Ovette and their little daughter Kamaria. Responsible for the genocide on his planet and for the death of his family was Ronan the Accuser, who acted under the orders of Titan Thanos. This is how he joins the Guardians for the purpose of stopping Thanos and taking down Ronan's genocidal fleet.

I posted this fact on my story and got hundreds of people asking me how? The application team was mostly the same @ on both films, so it wasn't that. The company that did the work on Vol 2, Legacy, created a sort of Drax "shirt" for his arms and upper body. In addition to being quicker it was much better - although the aesthetic design was cool from the beginning, the separate pieces in the first film would swell with Dave’s sweat and start to crinkle so that his whole body looked like a Sharpei. This required a lot of CG help and cleanup we didn't need in Vol 2. In the second film the shirt is so incredibly thin and form fitting we actually see way more of Dave’s body and muscles. Another fun fact: a cool scene I cut from the first film shows that Drax's tattoos are not about his conquests, but about the memories he has with his family: his mother and father in his childhood, his marriage to his wife, his daughter being born. These things are all in the specific design of the tattoos / scarification. #gotg #marvel #guardiansofthegalaxy

The meaning of tattoos

But before doing everything named above, during a deleted sequence from the first film directed by James GunnDrax confesses to Rocket and Groot that the engravings on his chest symbolize the day he married his wife Ovette. And higher up, near the heart, is the mark that represents the birth of her daughter, the only day that she has cried in her entire life.

In this regard, the director James Gunn He clarified that the engravings or tattoos that Drax has throughout his body, are not the result of war marks or symbols of his people, but have a deeper meaning. "Drax's tattoos are not about his conquests," Gunn said through Instagram, in a post detailing the character's makeup process. “They are about the memories he has with his family: his mother and father, his childhood, his marriage to his wife, the birth of their daughter. These things are all specified in the tattoo / brand design. ”

Although it may not seem like it, Drax reveals himself as a highly emotional character and his motivation throughout the first two films of Guardians of the Galaxy and the last two tapes of The Avengers it's about getting justice for your pain and loss.