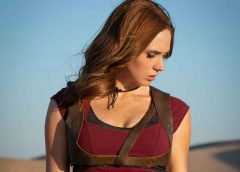 Actress Karen Gillan could be the new protagonist of the Pirates of the Caribbean reboot, which would make her the new Jack Sparrow of the saga.

The Pirates of the Caribbean saga has given Disney many millions of dollars and therefore instead of making a new installment with Johnny Depp as Jack Sparrow they have decided to restart everything. They want the new lead pirate to be a woman and are negotiating with Karen Gillan.

The source has insider information from Disney, as they've hit every scoop on the Film Studio. So Karen Gillan who has recently received great international recognition for starring in the reboot of Jumanji and Marvel movies like Guardians of the Galaxy, Avengers: Infinity War and Avengers: Endgame, will sail the seas and live great adventures. Let's hope he shows a great charisma to make Jack Sparrow forget, who has had a great impact since his first appearance in Pirates of the Caribbean: The Curse of the Black Pearl in 2003.

Johnny Depp is not expected to return.

Disney and Johnny Depp didn't end in the best ways, and it looks like they won't be working together again. So it's practically impossible for us to see the actor again in the Pirates of the Caribbean reboot. In addition, the new installment will surely try to get as far away from the other 5 movies as possible. So they need a new character who is on par with Jack Sparrow. At least Karen Gillan will be able to count on Chernobyl creator Craig Mazin and former Pirates movie writer Ted Elliot, who are still working on the script, while Jerry Bruckheimer and Chad Oman are on board as producers. At the moment there is no assigned director.

While Johnny Depp continues his career with films from the Fantastic Animals franchise, where he plays the villain Gellert Grindelwald.

Want to see more Pirates of the Caribbean movies without Johnny Depp being Jack Sparrow?