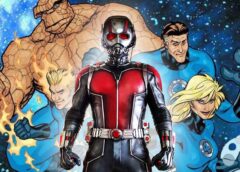 It has been reported for a while that Ant-Man 3 will be much more important than the previous two installments and there is a Marvel theory as to how they will introduce The Fantastic Four.

Since Disney bought FOX, fans have been looking forward to adding to the Marvel Cinematic Universe to The Fantastic Four and to X Men. We know that mutants will take some time before we can see them again in the cinema, but instead to Reed Richards, Sue Strom, Johnny Storm and Ben Grimm there are more and more rumors that they will arrive at any moment. Now we leave you a Marvel theory that points to Ant-Man 3 it would be the ideal occasion to see them for the first time.

During the pandemic, director Peyton Reed has been able to continue working on the script for Ant-Man 3 and is reportedly expecting to begin production in June 2021. Naturally, he is avoiding direct comment at the moment, but nonetheless, it has given a vague idea of ​​the kind of movie audiences can expect.

“Let's see… What am I allowed to say? We are working our way through the pandemic, there are some really exciting things in store, none of which of course I can tell you about right now, that's the Marvel way ... I think Ant-Man 3 will be a much more movie larger and more extensive than the first two. It will have a very different visual template, and that's all I'll say. "

These words, although not very significant, lead to the Marvel theory about the introduction of the Fantastic Four. Since Ant-Man 3 is supposed to explore the Quantum Realm, which featured prominently in the 2018 sequel and became a key plot point in Avengers: Endgame. But Reed's comments may suggest that's not the case. Because the "visual template" of the Quantum Realm is already quite established in the UCM.

Of course, that raises the intriguing question of where differently they could go.

An interesting possibility is that Ant-Man 3 could lead to Hank Pym, Janet Van Dyne, Scott Lang and Hope van dyne to the Macroverse also known as Overspace. The opposite of the Quantum Realm, also called the Microverse. According to this Marvel theory, both planes of existence can be accessed with the Pym particles.

To access the Quantum Realm you must shrink to subatomic size, but to get to the Macroverse you need to grow in size to an unprecedented degree, until your atoms pass a threshold and leave our dimension. Where the Quantum Realm is the dimension below ours, Overspace is essentially the one above. When the Fantastic Four first discovered Overspace, in an adventure in which they were randomly accompanied by Spider-Man. Together they discovered a fantastic world populated by different races at war.

Later, Hank Pym repeated these experiments himself, successfully entering the Overspace and growing beyond that, until he met the cosmic entity known as Eternity. Ant-Man 3 could, therefore, introduce a dimension that serves as the opposite of the Quantum Realm. With Hank Pym taking the rest of the heroes on another fantastic trip to Overspace. This would certainly fit in with director Peyton Reed's comment.

It would be easy enough to use the Overspace to introduce the Fantastic Four.

Just imagine Mr. Fantastic as a contemporary of Hank Pym, who also experimented with the Pym Particles but was interested in discovering Overspace by increasing mass rather than shrinking to enter the Quantum Realm, and got stuck there. By the way, this doesn't necessarily mean that Reed Richards and the rest of the Fantastic Four were old.

Time flows differently in Overspace, and in an even more complicated way than in the Quantum Realm. In fact, time seems to work differently each time they visit. The first time the Fantastic Four and Spider-Man made their way there, they spent hours exploring and returned home to find that a few minutes had passed. The second time, they spent hours there again, but lost two months of life on Earth. In fact, Mr. Fantastic deduced that the passage of time was accelerating exponentially.

So if events unfold like this and this Marvel theory is correct, it would look like an old dream of Peyton reed compliment. Since the director released a version of these characters to FOX in 2002. Imagining a story about an established superhero team operating in the 60's. "I developed it for about a year." He explained recently, “and we went through a few different permutations and a few different writers. But yeah, one of the big ideas was something set in the sixties that at that time structurally was going to be basically like What a night we had that day! (1964), where we weren't even going to deal with the origin story. It was just going to be like you were in downtown Manhattan. "

So Ant-Man 3 may be your great opportunity to develop your ideas to bring the Fantastic Four back. What do you think of this Marvel theory? Leave us your comments below.