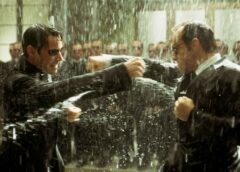 Thanks to a video from the filming of Matrix 4 an interesting theory has emerged that Agent Smith will return in the film in the form of NEO.

While the original actor Hugo Weaving will not reprise the role in the next film directed by Lana Wachowski, the leaked images from the set of Matrix 4 have led to a new theory that Agent Smith could make his comeback disguised as the movie as NEO, something that would also justify the presence of Keanu Reeves in the new installment of the franchise.

In Matrix: RevolutionsNEO allowed Agent Smith to assimilate him during their final fight, causing both of them to be destroyed. However, the footage that has been leaking from Matrix 4 Multiple duplicates swarming across two vehicles are shown, a tactic Smith employed in previous franchise films. Scheduling conflicts mean Smith is not going to return in his original form, so this is where NEO comes in.

The villain received powers from the hero.

Agent Smith revealed on Matrix: Reloaded that a part of NEO resides in him after his defeat at the end of the first movie. This caused him to amplify his powers, as he was able to infect other programs and even people in the real world, such as Bane. Smith could disguise himself as NEO by copying his rival's appearance and future events.

Similarly, the villain can manifest in a newly resurrected NEO. By allowing Smith to assimilate it in the ending of Matrix: Revolutions. NEO could have learned how to use Smith's own code to duplicate himself in an effort to trick death. If this is the case, NEO may be struggling to control Smith within him in Matrix 4. Which could cause him to attack or recreate other characters who return as Trinity or Niobe. This would explain how, despite the deaths of key characters, they are making a comeback, and why the leaked footage features duplicates.

With everything that happened at the conclusion of the trilogy, it is also possible that Neo will become the new agent program within the Matrix. Fearing that Agent Smith had become too powerful, the machines bent on controlling humanity finally achieved a truce with NEO and the humans to stop the spread of the rebel AI. After witnessing his sacrifice, the machines carried his body to his great city, apparently as a sign of respect towards his savior. From there, they may have created a rebooted NEO, deciding that it would be a suitable protector for the Matrix in the future. This Matrix 4 theory would make the great hero the villain, which would be an interesting twist.