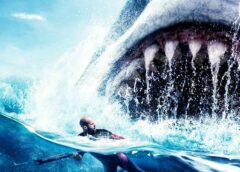 The movie Megalodon 2 (The Meg 2) gets underway and already has a director who will once again show us the largest predator in the sea.

After the great success of the first installment in 2018 that raised more than 530 million dollars, it is normal that they go for the sequel. Directed by Jon turteltaub and starring Jason statham They introduced us to the ultimate prehistoric marine predator. Now we will experience terror again with Megalodon 2, although this time it will be directed by Ben Wheatley.

This director is best known for haunting / surreal films like Kill List Y High rise, but Ben Wheatley took a step towards more mainstream cinema with the action film Free fire, and signed on to direct the sequel to tomb Raider of 2018, which will begin shooting in 2021. We can also see his film Rebecca actually in Netflix.

It is expected that Jason statham reprise the role of rescue diver Jonas Taylor, but it is unknown if the surviving members of the first installment as the characters from Li Bingbing, Cliff Curtis Y Ruby rose will join him in Megalodon 2. But even if the director is changed, the writing team of the first film consisting of Jon and Erich Hoeber and Dean Georgaris will repeat with the script for the sequel.

The first installment presented a whole prehistoric world that is deep in the Mariana Trench. There they discover beings that existed millions of years ago. But one of them decides to go exploring, it is an ancestor of sharks but of an enormous size. After an intense hunt, they manage to kill the animal. So Megalodon 2 the story should start from there and show more gigantic animals that attack human beings who are quietly on the beach.

Megalodon 2 will surely repeat the formula of horror, action and good special effects, which made the first installment the hit of the summer of 2018.