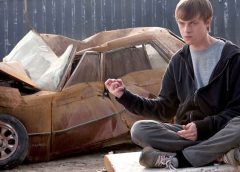 Although the 2012 movie was successful and speculated on with the sequel, they never got to do Chronicle 2 and these are the reasons.

Director Josh Trank says he deliberately sabotaged Chronicle 2, admitting that it is partly his fault that the 2012 film never received a sequel. This story is a science fiction thriller that follows three teenagers who become friends after an accident leaves them with telekinetic skills. However, as their powers grow, their relationship becomes more strained and they become more dangerous.

The movie stars Dane DeHaan, Alex Russell, and Michael B. Jordan. Actors who were little known at the time and now have great film careers behind them. It also served as the recognition of its director Josh Trank, who after its premiere signed to restart The Fantastic Four, with a rather disastrous result. The film was a financial success, raising $ 126 million with a budget of $ 12 million. So Chronicle 2 seemed obvious. Since this story came at the right time, because the superhero genre was at its highest point without saturation by as many movies or series as there are now. Additionally, fans wanted to know what happened after the events of the story, or to address what gave the characters their powers and if anyone else shares their abilities.

Director Josh Trank has revealed that he actively tried to sabotage the sequel to prevent it from being made.

In an interview, Josh Trank says he did things to slow down the development of Chronicle 2. “I made it difficult for them to organize meetings. I was doubtful about things. I did a lot of fucking things. ” Trank also explained that many of his problems stemmed from the script.

Fox had hired Max Landis (Mr. Right, American Ultra), who wrote the script for the first movie, to write the script for Chronicle 2. The new story would follow a girl obsessed with the surviving character from the first movie and decides Build your own "Iron Man" costume. Josh Trank thought the premise did not fit the reasons why he wanted to make the first movie, but the sequel was still unfolding. The director knew that he did not want to do the sequel and therefore did not want the film to be made. He thought if someone else ended up directing the movie, "it would suck," and said, "I never really wanted to see Chronicle 2 happen. That was my worst nightmare."