Psycho clown Art terrorizes two girls on Halloween night, killing all those who stand in their way

Terrifier is a different slasher,

Brutal starring Art, a clown who leaves Pennywise at the height of shoe polish, Art starred in Halloween Eve and the short Terrifier, directed by Leone. Here, the absolute protagonist is Art, where he improves the quality of the previous films. Everything happens in one night, Halloween, where two girls will be harassed by this clown so gloomy and unscrupulous. Terrifier manages to get a dirty atmosphere, with a photograph inspired by the slasher of the 70s and 80s, a feature that agrees with the aesthetics of the film as well as serving as a tribute to these films from the 70s. In addition, it also has a raucous soundtrack, which accentuates the atmosphere, in addition to serving as a tribute to Carpenter's films. 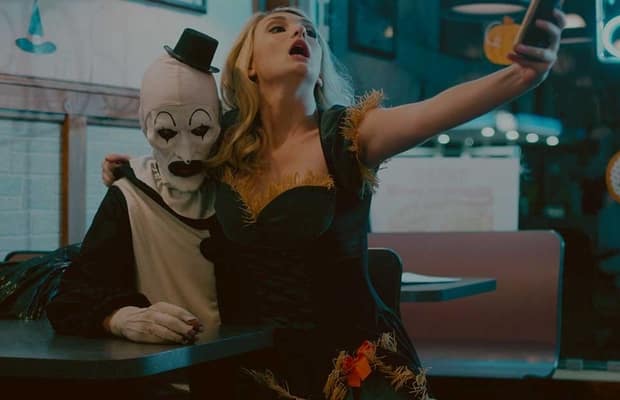 a masked assassin with no known identity and no motivation other than the will to killLike Myers, another great reference to Carpenter's movies. Art teases his victims with visual gags that are cool moments of the tape. Terrifier only seeks to entertain, since it is a series B movie, with a simple script, that falls on the topics, but that takes them in a brilliant way and plays very well with them, is a direct slasher, who plays with the gore without palliatives, without brake. A tape that plays with the beginning, connecting with the end, which is brilliant. Start slowly, until suddenly it explodes and it is a non-stop extreme gore.

Terrifier, in moments it gives grimace,

and in others it keeps you tense. The localization in a dilapidated building, which adds to that dirty fool in the movie. And it has some very strong scenes, where the director does not cut anything and makes the viewer see them with a grimace of displeasure. It is a great movie to hang out and have fun with the gore. Terrifier in addition to being sadistic is brilliant.

What does Terrifier look like? Tell us your opinion in the comments or on our social networks.

You may be required more