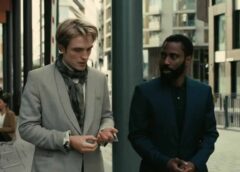 Tenet, the new film that Christopher Nolan prepared and that is ready to hit theaters, confirmed its duration.

If we take into account the current fashion of betting on films that last and last, Tenet turned out to be one of Christopher Nolan's shortest proposals, so far. It also shocks because of the complexity of its convoluted plot, a story starring John David Washington and Robert Pattinson that we hope will be able to explain itself in less than two and a half hours of footage that it has.

Although it is true that for these kinds of proposals moviegoers tend to prefer a longer duration, remember that 'Origen', one of the most popular films by this filmmaker, lasts 2 hours and 28 minutes, so the 149 minutes and 59 seconds Tenet's should be more than enough for us to be fascinated by Christopher Nolan and spark interesting discussions. In addition, a plan of almost almost 2 and a half is better than one of three considering the exceptional situation in which this blockbuster is going to be launched, the only one of the summer that seems willing to challenge the reluctance of viewers to return to the cinema of the hand of their masks.

Christopher Nolan wants to release Tenet, while Warner seems to still have doubts. This film would have to make 800 million just to cover expenses, that is, from this figure is when the studio would begin to have benefits. All this assuming that 400 million have been invested in making the film and the other 400 are being allocated to a more than necessary promotion if we take into account the circumstances.

At the moment, Tenet maintains August 12 as the date chosen to hit theaters, something that could change at any time considering that in the United States the coronavirus pandemic continues to complicate itself.