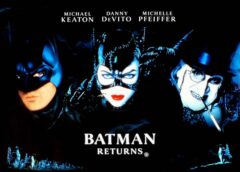 The Flash movie will change the timeline and Michael Keaton will reprise the role of the Dark Knight after Batman Returns (1992).

The movies of DC Comics they will expand and explore the concept of the Multiverse. Since The Flash will travel to the past to save his mother and this will cause radical changes in the timelines. He Ben Affleck's Batman will cease to exist and the version of Michael Keaton will take its place. So we can know what he has been doing since the events of Batman Returns. But it can also provide a solution to a big hole in the plot of that movie.

In Batman Returns 1992, the great DC Comics hero is accused of kidnapping and murdering the Ice Princess of Gotham City. This cruel act is part of the broader plan of The Penguin and the corrupt businessman Max shreck, interpreted by Danny DeVito and Christopher Walken. Since they want to get The Penguin be the mayor of Gotham. But everything is frustrated when Batman plays an audio during a Penguin rally showing his true intentions. Once The Penguin opens fire on the crowd, he is forced to flee back to Gotham's sewers. However, there is only one big problem: Batman himself was never acquitted of murdering the Ice Princess.

Not only that, but The Penguin had also managed to hijack the Batmobile by remote control.

The actions of The Penguin in Batman Returns caused the hero's vehicle to recklessly wreck the streets of Gotham with Batman inside. So Gotham City police tried to stop him. Which means The Flash may provide a belated answer to how Batman's innocence was proven, with Michelle Pfeiffer's Catwoman being particularly suited for this.

In Batman Returns, Catwoman had helped destabilize the Dark Knight. But even she was surprised when the Ice Princess died and said to The Penguin: "You said you were going to scare the Ice Princess." Although Selina Kyle has chosen to continue her criminal life at the end of the film, her love for Bruce Wayne could have forced her to anonymously provide proof of Batman's innocence to the Gotham City police.

So The Flash can solve the big Batman Returns script hole when he brings Michael Keaton back in as Bruce Wayne again.