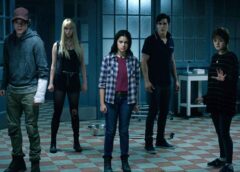 One of the actresses of The New Mutants has responded to critics who say it is the worst X-Men movie in history.

Some critics have named The New Mutants as the worst of the franchise of the X Men, which is somewhat exaggerated considering that there are movies like Apocalypse (2016) and Dark Phoenix (2019). So Maisie williams (Game of Thrones) who plays Rahne Sinclair / Wolfsbane wanted to answer those who are brutally attacking the new installment of the saga.

The title of forbes.com en: The New Mutants is the worst “X-Men” movie ever. There is a very exaggerated opinion in the article.

Since we can read:

“The New Mutants is a miserable movie. It's a drab, redundant, and irrelevant fantasy film that doesn't commit itself to being a teen melodrama, fantasy, or horror movie, but rather offers half-hearted components of all three. Despite a strong cast, the all too rare presence of an LGBTQIA romance between two main characters, and some moments of visual inventiveness, Josh Boone and Knate Lee's The New Mutants boils down to being, yes, a terrible feature film prequel to a sequel. that absolutely no one will ever want to see ”.

After reading this Maisie William took it easy and replied, “Sounds like a must see! Get your tickets now ”.

You really don't have to listen to criticism.

While it is true that they had sold the film as a horror story and The New Mutants are not scary at any time, not even when they are haunted by nightmares, it cannot be said that it is miserable, as it is quite entertaining and has very interesting. Also, what I least agree with is that in the end, it does leave you feeling like you want more. Since it would not be such a bad idea to be able to see these characters again in some other adventure. Although we know that this is impossible. But what is clear is that X-Men 3, Apocalypse and Dark Phoenix they are much worse.

In conclusion, let each one decide if they want to go to the cinema to see The New Mutants and then determine if they like it or not. So do not pay attention to the criticism of forbes.