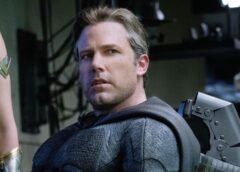 Since WarnerMedia agreed to let Zack Snyder release his version of Justice League on HBO Max years after the studio version hit theaters, fans now expect David Ayer's Suicide Squad to receive the same treatment. There are many differences between the "Yesterday Cut" and the theatrical release of Suicide Squad, and the director has been fanning the flames of the movement by dropping new details. But now, a member of the film's stunt team has shed some light on the potential of seeing more Batman scenes.

Ben Affleck returned as Batman for some scenes in Suicide Squad, and his stunt double revealed that some of his work was left in the courtroom. Richard Cetrone, who was Affleck's Batman double in Suicide Squad and other DC movies, recently did an interview with Lady Falcon and spoke about Batman's role in Yesterday's cut. Cetrone expressed his desire to see Yesterday's Cut and offered some Batman scenes that could include:

As it is, Suicide Squad only features three scenes featuring Affleck's Batman and only two in the suit. It's included in Will Smith's Deadshot intro, with the two fighting before Deadshot lets Batman stop him. The largest sequence for Batman comes with the car scene referenced by Cetrone, where Batman is engaged in a high-speed chase to catch the Joker and Harley Quinn. Although it starts in the Batmobile, the Dark Knight finally ends up on top of the Joker's car before the Clown Prince of Crime crashes him into the river.

The additional Batman scenes in Suicide Squad may be minimal at best, but a little more of Batman in action will appease many if the Yesterday Cut is released. Even if that doesn't happen, DC and Batfleck fans should see a lot more (and Cetrone doing the stunts) in 2021. There will be plenty of new Batman scenes in Zack Snyder's Justice League, and Cetrone may have to go back to double Batman again if further tinkering is needed. But, if Suicide Squad's Ayer Cut is released, there seems to be a chance that Batman has a bigger presence as well.