Fans have ever wondered if Marvel Studios would adapt House of M as an Avengers movie, but it looks like Phase 4 of the MCU could have even bigger plans for this popular title from the house of ideas.

Following the events that took place at the end of Marvel's Phase 3, the MCU needs to find a new way to keep the bar shown so far as high as possible – and the story of House of M might be just what they're looking for. House of M is a popular Marvel Comics story published in 2005 that radically changed the status quo of the Marvel Universe in just a few issues. In it, Wanda Maximoff uses her reality-warping powers to rewrite the fabric of reality. The change results in an altered timeline in which mutants, led by Magneto, have become the dominant species on planet Earth, with humans viewed as inferior with the exception of a few examples.

The story is arguably one of the most important events in Scarlet Witch's life, and comic book fans have been curious to see if the MCU would ever adapt the story. Wanda Maximoff was featured in Avengers: Age of Ultron, but due to issues with the rights of the X-men characters that were then owned by 20th Century Fox, certain elements of Wanda's character could not be used prior to 2019, such as his mutant status, the details of his ancestry, and further elaboration of his powers based on Chaos Magic.

Wanda's abilities make her one of the most powerful characters in the MCU, being able to almost defeat Thanos himself who narrowly escaped her attack, and House of M is a devastating display of only a fraction of her power. While the story seems adequate to fit into a single movie, there could be evidence to suggest that all of Phase 4 could take place within the dimension created by Wanda.

Explanation of House Of M

House of M is literally one of the most influential stories in Marvel Comics history, and the outcome of the story affected the relationship between mutants and humanity for decades to come. After several major crucibles experienced by the X-Men, including the events of Planet X, the coexistence between mutants and humans is getting worse and worse. This puts the mutant heroes of the X-Men to the test, but will also cause tremendous trauma to Wanda Maximoff, who at the time was dealing with her inability to have children with Vision.

With their trauma and vulnerability manifesting as unintended manifestations of their power, both the X-Men and the Avengers met to discuss options on how to handle the crisis. Some of them sought peaceful means, but other characters like Emma Frost and Wolverine came to the conclusion that Wanda needed to be killed. After a heated discussion, Xavier leads the two teams to Genosha to intercept Wanda, only to be too late when a blinding flash of light engulfs the world.

The inevitable revelation is that Wanda has completely rewritten the fabric of the Marvel Universe, creating a world in which an assassination attempt on her father's life in the 1970s led to the revelation of a massive genocidal conspiracy against mutant humanity. . As a result of the exposure of this plot, mutants become a protected class by the wider international community, eventually leading to a world in which mutants make up 50% of the world's population and humans are viewed as lower. Some heroes also receive revolutionary changes; Spider-Man is now married to Gwen Stacy and viewed as a celebrity, Steve Rogers has aged in real time, and Wolverine (the only one who remembers the events of the original timeline) is now an agent of S.H.I.E.L.D.

The most important Phase 4 movies related to the Multiverse

Fans have known for quite some time that Marvel's Phase 4 would be largely immersed in the concept of a multiverse, a metaphysical concept that the comics themselves have been working on storytelling for years. It was confirmed directly at SDCC 2019, that the 2016 sequel to Doctor Strange would be called Doctor Strange and the Multiverse of Madness, announcing that Scarlet Witch would be joining Sorcerer Supreme in the film, and that it would be related to his Disney + series . For a while, it's been believed that the Doctor Strange sequel would only create a few storytelling opportunities, but it seems like it will be so much more.

Recently, more and more puzzling news has been revealed about some of the biggest movies in Phase 4, and it all points to the multiverse. There's the matter of Jane Foster becoming Thor in Thor: Love and Thunder, and while this is something that happens in the comics as a result of Jane being diagnosed with cancer, that explanation might be too bleak in such a lighthearted franchise. like Thor. Then we were recently surprised to find out that Jamie Foxx will return as Electro in Spider-Man 3 with Tom Holland as Peter Parker, a reveal made even more intriguing by an Instagram post from Foxx that apparently sparked an event in the Spider-Verse. . We also know that the Loki series will follow the character hopping back and forth across different timelines, further supporting the idea that all of these changes could be the result of manipulation of the multiverse.

Scarlet Witch and Vision could start the MCU multiverse

Disney + subscribers will be delighted to know that unlike other Marvel shows scheduled for this year, WandaVision is still holding its premiere for this year. The first trailer revealed a surreal homage to classic television throughout the years, all wrapped up in a larger story that somehow involves the witch's reality-warping abilities and a proto-variant of the SWORD organization. With so much going on, it's hard to figure out the details of what will be happening in the series, but one thing fans have generally accepted is that Wanda has somehow created an alternate reality in which Vision has come back to life and with the one that forms a family.

If this is the case, the basic assumption is that this reality will unfold over the course of the series, perhaps with a link to the next installment of Doctor Strange. However, there is always the possibility that the MCU is looking to tell a bigger story than that. In the comics, the potential of Wanda's powers seems almost limitless, only limited by her experience and her willingness to use them. House of M shows just how destructive those abilities can be when used by someone in a state of emotional turmoil, and WandaVision seems to be preparing to do the exact same thing. There is a strong possibility that Wanda's powers could have repercussions not only on the events of the series or Doctor Strange in the multiverse of insanity, but the entirety of Phase 4.

Phase 4 could be an adaptation of House Of M

In the comics, only a few heroes can perceive the modified timeline that Wanda creates in House of M. The other characters simply believe that the altered reality is the real one, blissfully unaware of the radical changes made to the fabric of the story. The MCU could be preparing to make a very similar story with each of the solo films in Phase 4. As the phase begins with WandaVision, the series could be the catalyst that alters the structure of the MCU, resulting in multiversal deformations within. of each of the solo films of his characters. This could explain the strange changes like the existence of Jane Thor and the return of Jamie Foxx as Electro, leaving Doctor Strange in the Multiverse of Madness as the movie in which Wanda's manipulations are finally reversed. It would certainly explain why Phase 4 doesn't seem to have an Avengers movie scheduled, as instead of giving us a team movie, they are using an entire Phase to play with the concept of alternate universes. 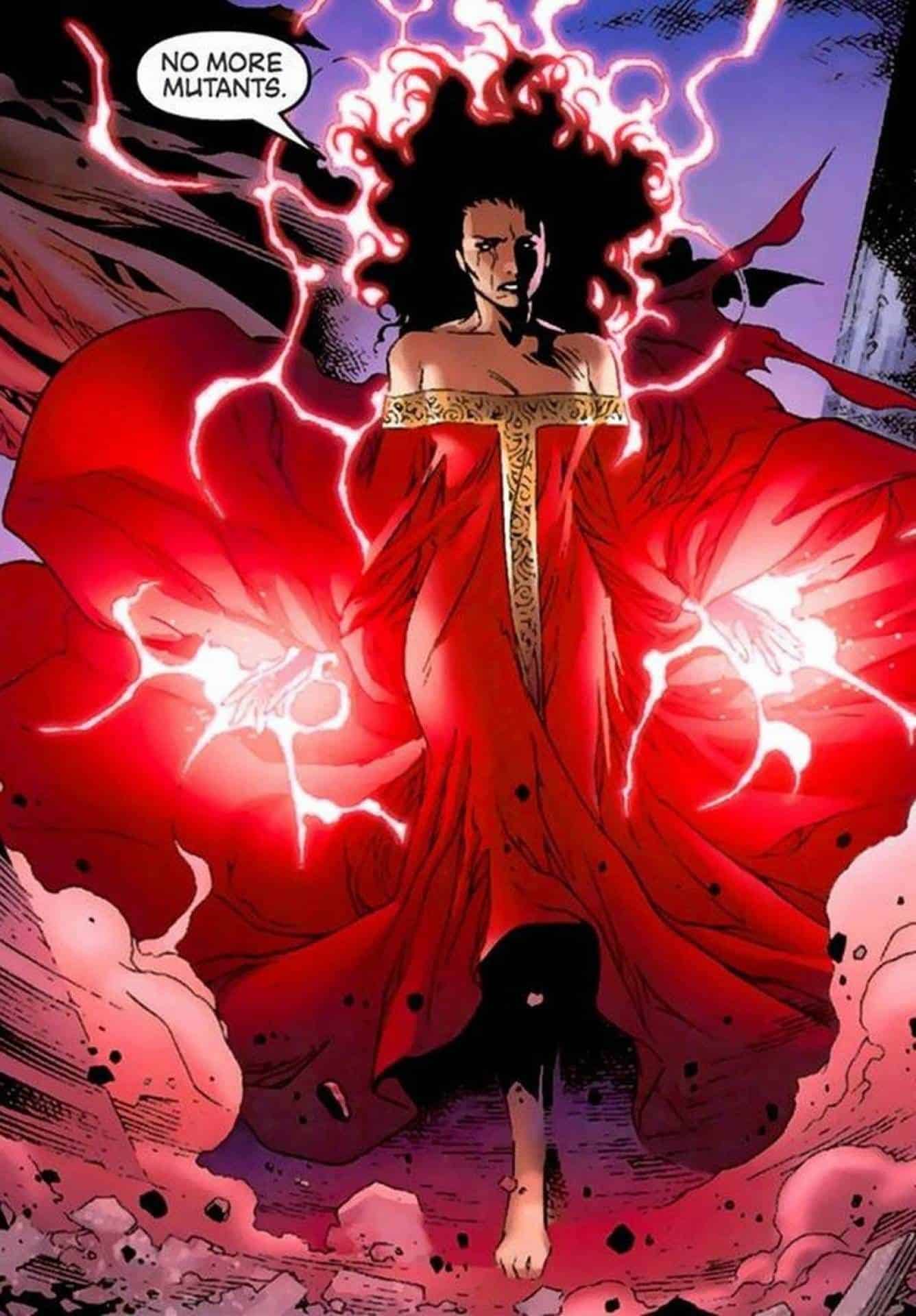 Not only does this have repercussions for solo movies affected by Wanda's powers, but it could also give the MCU a perfect justification for bringing in the X-Men. At the end of the House of M comic story, Wanda utters the phrase "no more mutants", and once again warps reality by defeating thousands of mutants around the world. This moment is known as the Annihilation, an event that drastically reduces the mutant population to just a few hundred. Since mutants don't exist in the MCU yet, the conclusion of House of M could end with Wanda accidentally creating the mutant population, in an effort to fill the world with more people like her. The idea of ​​the MCU making a House of M adaptation gives them a lot of creative freedom to move forward, and Phase 4 would be the perfect place to do it.