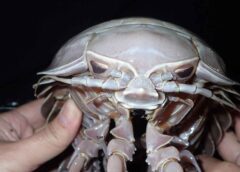 Any good horror movie has a horrible monster that torments human beings, but nature knows how to offer the right inspiration.

Our planet has shown that it has many hidden secrets, as the oceans themselves remain among the greatest unsolved mysteries on Earth. Estimates from the U.S. National Oceanic and Atmospheric Administration even project that more than 80% of the underwater world has yet to be seen by human eyes. This makes each new discovery about what lies beneath our waters exciting. Especially when it comes to monstrously large sea cockroaches with 14 legs and reflective eyes. Without forgetting a head that looks like the helmet of Darth Vader, mixed with Alien and Predator. Perfect for starring in a horror movie.

He Bathynomus raksasa It is a giant isopod that was first discovered off the southern coast of Indonesia in 2018. But it has recently been recognized as a new species. While most of the previously recorded giant isopod species have been found to grow to about 30 centimeters at best. Specimens that reach much larger sizes up to 50 centimeters have already been discovered. The London Natural History Museum attributes the gigantic size of the isopod to a low level of predation in its cold habitat. Allowing your specimens to vastly outperform their fellow Bathynomus. So, as if it were a good horror movie, the discovered specimens might not even be the largest, and we might get to see much larger specimens.

These creatures have been colloquially called "sea cockroaches".

An appropriate name for Bathynomus raksasa, since it has been observed that they share survival adaptations with terrestrial insects that if they infect a house make the lives of its occupants a true horror movie.

Attention images not suitable for those who suffer Katsaridaphobia or fear of cockroaches:

So it is very easy to make a horror movie about a Megalodon or any prehistoric creature ... But this giant marine cockroach could be much more shocking to viewers.