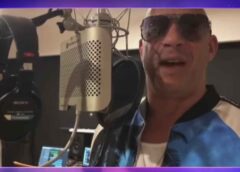 All those who have seen a Vin Diesel movie in its original version will know that he has a very deep voice, now we will check if he is also a great singer.

The actor Vin Diesel best known to movie franchises as Fast and Furious, Riddick Y Guardians of the Galaxy, releases his first single "Feel Like I Do", a collaboration with the music producer Kygo, in an appearance on the show The Kelly Clarkson Show.

Although we associate the name of Vin Diesel to action movies and very tough characters, he has always been in love with art that goes beyond what we can see in his films. Now he shows his talent as a singer with the song "Feel Like I Do", which must be recognized that it is quite good.

Here we leave you the moment in the program of The Kelly Clarkson Show where we can listen to the song of Vin Diesel. At first he comes out talking and the music does not start until the minute 1:18.

What do you think? Leave us your comments in the opinion section.

You may have a future in the music industry.

Vin Diesel's new song is a collaboration with Norwegian music producer Kygo, who has released remixes of music icons Donna Summers and Tina Turner. The song “Feel Like I Do” features the actor's soft, low voice over a surprisingly upbeat pop track.

Although making his debut as a singer, Vin Disel still has many film projects. In 2021 it will premiere Fast and furious 9 where it is speculated that it will have scenes in space. Since it is one of the few milestones that the franchise is missing. You must also return to Marvel Universe as Groot in Guardians of the Galaxy Vol 3. Not forgetting that I could play Riddick again in Furya and in the spin-off series Merc City. But it will also make the movie The Machine, Where an innocent child reactivates a human-like machine, the device draws on his latest skill set to protect the boy and his family from the government forces that dismantled him twenty years earlier.