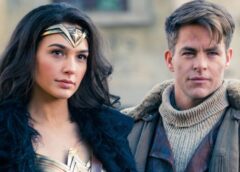 Although not much is known about Wonder Woman 1984 yet, the rumors began to circulate and new details have already been revealed about the differences that Steve Trevor will have with respect to the first film.

There are not many details that we know about Wonder Woman 1984, but we are aware that Steve Trevor will return to history and therefore, we will see Chris Pine again on the big screen. He recently spoke on the matter and while we don't really know yet how Patty Jenkins will justify the character's return, we now know that the 1918 Steve and the 1984 Steve will have some significant differences.

During the 2017 movie, we saw Steve sacrifice himself to help Diana in the film's final battle. Chris Pine's character was fired with valid story justification that might help us understand why the Amazon had no more romances in the future. An assumption that was invalidated when Trevor returned for the sequel's trailers.

Chris Pine spoke to Total Film Magazine (via) about his character and the surprises that await us in Wonder Woman 1984. Although he did not reveal the origin of his new character or the way in which his return will be justified, he did offer new details about the personality of a Steve that will now unfold in the eighties.

"What I'm going to say about him is that he's deeply excited," said Chris Pine. “He is excited to be back with Diana. He is excited about this world. In tone it is different because it is not tired of the world. He is not tired. It's a 180 degree turn to the character's tone in the first movie. ”

In the original tape, Steve is an undercover spy who has a very pessimistic view of the world and the people who live in it. In part, this is one of the reasons why he decides to sacrifice himself, because he is a character who has nothing to lose, except the newly known Diana. Despite the death of her character, Pine revealed that director Patty Jenkins toyed with the idea of ​​bringing him back in Wonder Woman 1984 and even before the previous film hit the screens.

“Patty (Jenkins) already had an idea towards the end of the first one. At that time then I had the idea that I would return. I think I could even have talked about it while promoting the first movie, "he explained. She also assured that in Wonder Woman (2017) the character of the Amazon was the one who gradually knew the environment and adapted to the new world, while Steve moved like a fish in the water. However, in 1984 the roles will be reversed and that will make a total difference in the character's tone.

We will have to wait to see the film, since it recently changed its release date.